You are here: Home1 / About CEPA2 / Meet the Team3 / Julia Schweikert 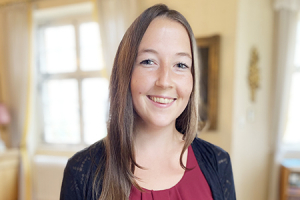 Julia was born in Heilbronn and raised in the beautiful Weinsberger Tal, more precisely in Obersulm, not far from the CEPA Headquarters in Ingersheim.

Her fascination for other languages and cultures already started in school and led to her successfully completing her Abitur in English and French, which afterwards both became her fields of study. In addition to various courses and lectures about the English language, literature and culture, she chose French as her minor and also took some language classes in Spanish. Julia earned her Bachelor’s degree in English Studies at the University of Heidelberg in the Spring of 2017.

She is not only interested in other languages and cultures, but also very open-minded and enjoys meeting new people, including – of course – people from abroad. Before she started her job at CEPA, Julia spent some time in Tilburg, The Netherlands, which was a valuable opportunity for her personally, as well as spending time abroad which is an experience you will never forget.

Julia very much enjoys being able to work in an international environment, making use of her language skills, and enabling students to spend time in another country, all at the same time!

In her free time, Julia enjoys both sports and music, she plays tennis, supports her favorite ice hockey team and enjoys going to concerts as well as making music herself. Her native language is German, she is fluent in English and has a reasonable command of both the French and the Spanish language while currently also learning Dutch.

“A journey is best measured in friends, rather than miles.” — Tim Cahill